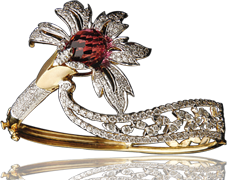 Being an experienced jewellery designer, Aum Monica Kapur focuses on maintaining the originality and creativity of the ornaments that are custom designed and developed.

She is an avid jewellery artist and designer, she started her career from the scratch and took basic and advanced designing course at JPDC (Jewelry Product Development Center).